The 4-dimensional membrane: Dynamics of protein-lipid interactions in membrane domains

Our project is aimed at understanding the functional role of membrane lipid rafts and the interactions of lipids and proteins therein. We study their main constituents sphingolipids and cholesterol in (patho-) physiological processes at the cellular level, in particular in relation to tumour and astrocyte cell biology. Among the proteins of interest are ATP-binding cassette transporters (ABC transporters) and the actin cytoskeleton. ABC transporters, such as MRP1, are known to confer multidrug resistance to tumour cells and are known to be expressed in the brain, including astrocytes. We have extensively studied MRP1 localization and function in various multidrug resistant human tumour cell lines. The role of sphingolipids, cholesterol and the actin cytoskeleton were investigated in-depth. This research effort resulted in a model for the localization of MRP1 in lipid rafts, which are stabilized by cortical actin.

The central working model in our research is depicted in the following diagrams: 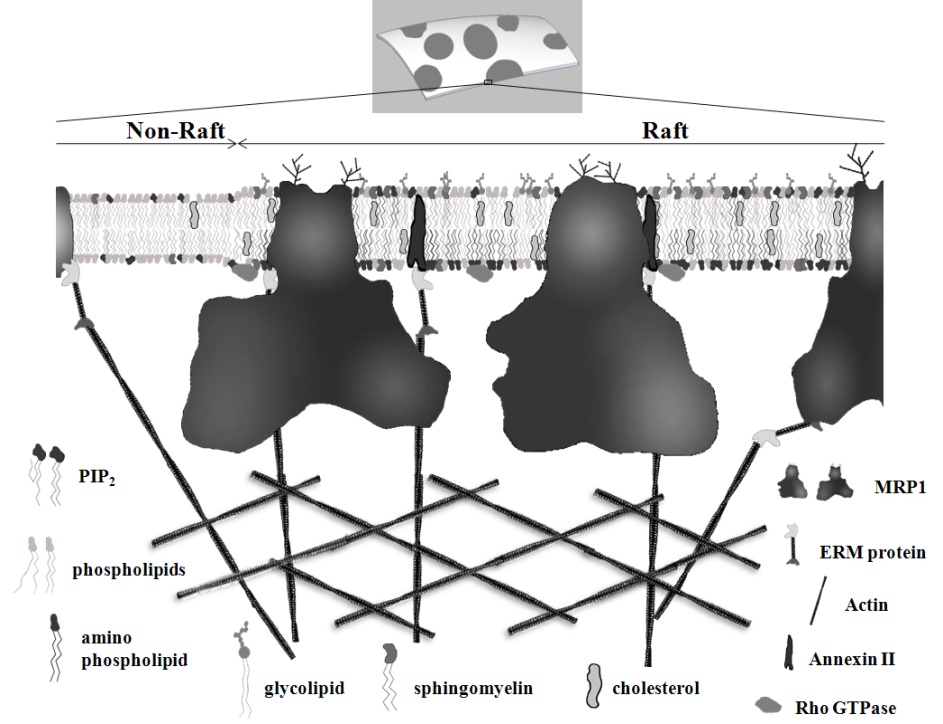 Figure 1: MRP1 is kept in a specific membrane location (lipid rafts) by virtue of lateral interactions in the plane of the membrane with the raft-specific lipids cholesterol and sphingolipids, but also with raft-associated proteins. In addition, localization and stabilization of ABC transporters in a certain membrane area can be established by direct or indirect interactions with the (cortical) actin cytoskeleton, which forms a dense network underlying the plasma membrane and  constitutes a transverse coupling system with respect to the plane of the membrane. Thus, the two axes of stabilization around the central lipid raft may together provide a 3D network for correct localization and optimal function of the ABC transporter.