A healthy proteome in cells is not only crucial for functionality of cells, but also essential for preventing damage (protein aggregates) that lead to a cascade of toxic events that threaten cellular health span. To ensure a proper protein homeostasis, an intricate protein quality control (PQC) network exists in cells in which Heat Shock Proteins (HSP), the central  research topic in my group, play a central role.

Disturbed protein homeostasis is a key event during cellular thus affecting age-related diseases and organismal. Inversely, genetic mutations in proteins that increase the risk of protein aggregation or that impede on the protein quality control (PQC) mechanism that maintains normal protein homeostasis often lead to accelerated aging or early onset of age-associated diseases.  Heat shock proteins (HSP) assisting in protein folding as well as protein degradation (proteasomal and autophagosomal). The central aim of my group is to increase our understanding how the many HSPs in human (> 100 different ones) are regulated to recognise their targets and steer them towards folding or degradation and how this knowledge can be exploited to combat diseases in which this protein homeostasis is disturbed. The focus is on what regulates the input and output of protein substrates into the so-called HSP70 machines, the central hub in the cellular PQC system.

Heat shock 70 kDa proteins (HSP70s) are ubiquitous molecular chaperones that function in a myriad of biological processes. This multitude of roles is not easily reconciled with high sequence identity of Hsp70s within and across species (Figure 1A) and the universality of the activity of HSP70s in ATP-dependent client protein-binding and release cycles and wherein client protein recognition is typically rather promiscuous. Yet, functional differences have been observed for some of the 7 cytosolic HSP70 members that are studies in my group. In addition, the apparent conundrum of multi-functionality and client binding promiscuity is likely resolved by the fact that HSP70s do not work alone, but rather as ‘HSP70 machines’, collaborating with and being regulated by several cofactors. A ‘minimal Hsp70 machine’ is made up by at least one DNAJ, one HSP70 and one Nucleotide Exchange Factor (NEF) (Figure 2B). The canonical model for the functionality of these machines has two key features: 1) the initial binding of an unfolded client protein occurs by a J protein that ‘delivers’ it to HSP70, in addition to (with the bound client) stimulating HSP70’s ATPase activity; 2) the dissociation of the client is caused by NEF actions, which gives the client either the opportunity to fold into its active conformation or, if folding is not yet complete, allow clients to re-enter the cycle such that by reiterative cycles of client binding and release productive folding can occur, whilst at the same time aggregation is prevented during the time the client is bound. So, in this simplest view the many different DNAJs may define client specificity. At the same time the different NEFs may, besides the biochemical state of the client itself, determine the fate of the client. Figure 2C 🙂  schematically summarises our current hypothesis which is being tested in diverse projects in the lab.

A myriad of age-related diseases, mostly in tissues with low regenerative capacity (brain, heart, kidney), have been associated with the existence of protein aggregates. Research from (often rare) genetic variants that predispose for such diseases have shown that the mutated proteins are not only found in the aggregates in the idiopathic cases, but also often reveal an increase in the aggregation propensity of the respective protein, strongly suggesting that protein aggregation drives the diseases pathology. This is supported by a wealth of data from experimental models. Combined with the evidence showing that overall protein quality control declines with ageing, it has been postulated that protein homeostasis imbalances are key to the chronological ageing of many differentiated cell types (idiopathic disease) and lead to earlier onset of such diseases in case of genetic mutations (Figure 2: <bekende curve>).

In my group a number of (genetic) protein aggregation are studied, with the aim to identify the key, rate limiting HSPs that can counteract the respective aggregations in these diverse diseases. The disease we have studies or are  studying include:

My group has shown that, despite the fact that all these diseases are characterized by aggregates, different nodes in the HSP70 machines seem crucial to combat the respective aggregations. In particular, we have identified two structurally related DNAJ family members (DNAJB6 and DNAJB8) to be highly effective in suppressing aggregation and toxicity of the polyQ proteins causing CAG-repeat diseases (in vitro, in vivo) and of Aß-42 causing AD (in vitro).

Mutations in HSPs themselves can lead to pathological conditions termed chaperonopathies that also are mostly associated with accumulation of protein aggregates. The first chaperonopathies found concerned mutations in members of the family of small HSPs (HSPBs). Later, members of the chaperonins and DNAJ families as well as some other chaperone cofactors (e.g, in BAG3, a  HSP70-NEF) have been implicated heritable chaperonopathies. No genetic chaperonopathies are associated with the Hsp70/HSPA or Hsp90/HSPC family members, either because of functional redundancy within these families or because they are crucial to the central chaperone machinery such that mutations leading to functional defects are incompatible with life. Clinically, these genetic chaperonopathies can be categorized into neuropathies [hereditary spastic paraplegia, motor neuropathy, distal hereditary motor neuropathy (dHMN)], myopathies (dilated cardiomyopathy, leukodystrophy, desmin-related myopathy, mitochondrial myopathy, muscular dystrophy) or retina- and eyelens- related diseases (congenital cataracts) (Macario et al., 2005)(Table I). A variety of these mutated chaperones have been or are studied in my research group to investigate how they lead to protein aggregation (loss of function, dominant-negative effects, self-aggegation and toxic gain-of-function) and whether and how these effects can be ameliorated. 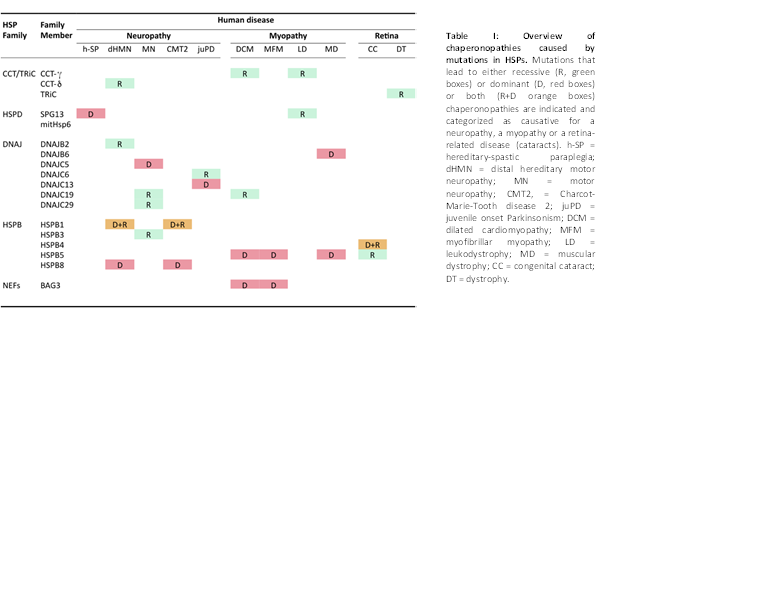